Lightning's Boxing Club has been a training facility for thousands . The unique family atmosphere makes it an easy place to settle into, and many members consider the sanctuary their home away from home. Training at Lightning's Boxing Club is authentic, it is one of the last full service gym's that operates like a traditional boxing gym. On any given day you may be training alongside the very best fighters in professional boxing. Some of the fighters that have trained at Lightning's Boxing Club include Pound 4 Pound Legend and Olympic Gold Medalist Andre Ward, Nonito Donaire 4 weight division World Champion, Aaron "Heavy Metal" Coley current title contender trained by Lightning Lopez, Karim Mayfield former IBO World Champion, Current Contender on the Rise Andy Vences, Silver medalist Shakur Stevenson , "Dynamite" David Lopez youngest pro fighter signed to Mayweather Promotions,  other Local boxing stars Trained by "Lightning" Lopez include Tony Hirsch and Luis Garcia 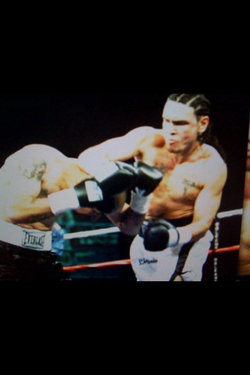 ​"Lightning" Lopez began his boxing career in 1997 at the world famous Kings boxing gym in Oakland Ca. He instantly gained recognition by the local boxing community as a fighter with exceptional talent. He earned his nickname "Lightning" from the late Marsha King because of his blazing fast hands. Kris went on to win 2 consecutive Golden  Glove titles , and compiled an impressive 10-0 amateur record with 7 of the wins coming by way of knockout! Kris always dreamed of one day fighting as a professional, because he lacked daily structure, and a consistent male role model in his life Kris missed his window during his prime years. In 2007 at the age of 30 Kris finally realized his dream debuting in the mecca of boxing  as a professional in what would be the 1st fight in Las Vegas in 2007. Unfortunately Kris was disqualified for excessive holding and hitting in the last round of the fight. This would be his only fight as a pro.

​Today he operates his "Lightning's" boxing club in Oakland Ca. He is a professional and amateur trainer. Many of his fighters consider him to be their "Mentor". Kris' goal is to make certain young men and woman are given a fair chance, by learning from the mistakes he made during his campaign not only as a fighter, but as a young man trying to find his way.